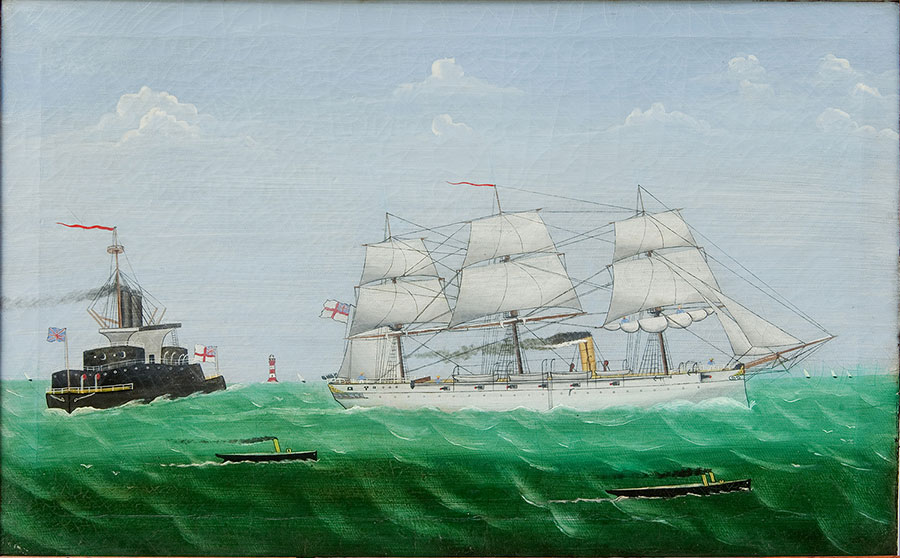 Our online Exhibition of British Folk Art begins 12th June. It is scheduled to coincide with Tate Britain’s retrospective on the subject which is now less than a month away.

I believe that Tate Britain’s exhibition is possibly more encompassing in it’s scope than perhaps that of the average Antique dealer who specializes in the subject, but of course the museum have the liberty to exhibit things of any period.

I understand they will be exhibiting embroidery by Mary Linwood plus work by the esteemed Cornish naive artist Alfred Wallis and a thatched figure of King Alfred by the wonderfully named Jesse Maycock. There will also be maritime embroidery by the fisherman John Craske and a patchwork quilt by Jane Williams.

While on the subject I am hoping to see Elizabeth Allen’s collage of various materials entitled ‘Population Explosion’ which shows a mother in a maternity ward in a long bed with her seven newly borns lined up down the side of the bed. To all intense and purposes this is a highly amusing masterpiece although in reality alas tells a very sad tale of a woman who had taken a fertility drug.

Interestingly the artist Elizabeth Allen was the daughter of a tailor who busied herself collected various off cuts and scraps to make her art work. There is also an early nineteenth century echo of this behaviour in the work of George Smart the tailor of Frant who also didn’t like to see good materials go to waste and produced some absolutely timeless collage images including most famously ‘The Goose Woman’ who often found herself in the company of ‘Old Bright The Postman.’ His other most famous offering was ‘The Earth Stopper’ depicting the story of a man who had been commissioned to fill up fox-holes and late one evening had a scary encounter with what he believed was the devil!

Additionally to what I have mentioned already Tate Britain’s Exhibition will also include Ship’s Figureheads and painted trade signs which were not only costly but obligatory in London in the 18th century. Toby Jugs will also be on display along with an intricate sculpture of a Cockerel made out of mutton bones during the Napoleonic wars by french prisoners of war.

Having said that I never go into provincial museum however small without finding something interesting [ that would  fit into the folk art genre ] so it is always worth finding the time to have a look.

Here follows a list of museums that have permanant collections

Our online exhibition of naive pictures

I have been a bit remiss, in writing this, my blog.
We have changed Webb designer so the website has been completely overhauled and now has a slightly new look and should prove to be more efficient for all.
Obviously these changes have taken us some time to implement that is why there has been no blogging recently.

Our main news is we now have a date for our online exhibition of naive pictures. This will begin on the 1st October 2013.
‘Extremely pleased’ is a summary of the way I feel about the quality and diversity of the pictures we have collected for this event. Most of the exhibits have British origins although having said that, three of them have come from America – including a naive portrait of a gentleman. There is also a striking naive landscape of a rural Pennsylvanian community which is housed in a fabulous burr Yew-wood frame. Additionally there is a small Indian ink drawing of an English Man-of-war which is the work of one Moses Sperry who kept a diary which he began in 1801. He liked to embellish his Chronicles with naive sketches including shipping that he may possibly have seen in Long Island Sound. His home was in Southbury Connecticut and according to his log he seems to have spent an awful lot of time chopping wood!

A further marine picture we have is possibly the star of the show and is illustrated in James Ayres book ‘200 Years of Naive English Art’
For those of you with an interest in local works we have a family portrait of John and Ursula Cragg and their seven surviving children. This is a small but very detailed interior scene giving an excellent idea of what domestic life was life 200 years ago. The painting is in oil and on a quarter-sawn oak panel.

John Cragg who came from Horsham became Horologist to the Admiralty and as a teenager was apprenticed to Charles Smith a clockmaker in Dove Ct. of Lombard street, London. Part of Johns apprenticeship fees a premium of £21 was paid by Christs Hospital School.
Ursula Cragg was a cousin to Elizabeth Batts the wife of Captain James Cook and the Cragg children featured in Elizabeth cooks will.